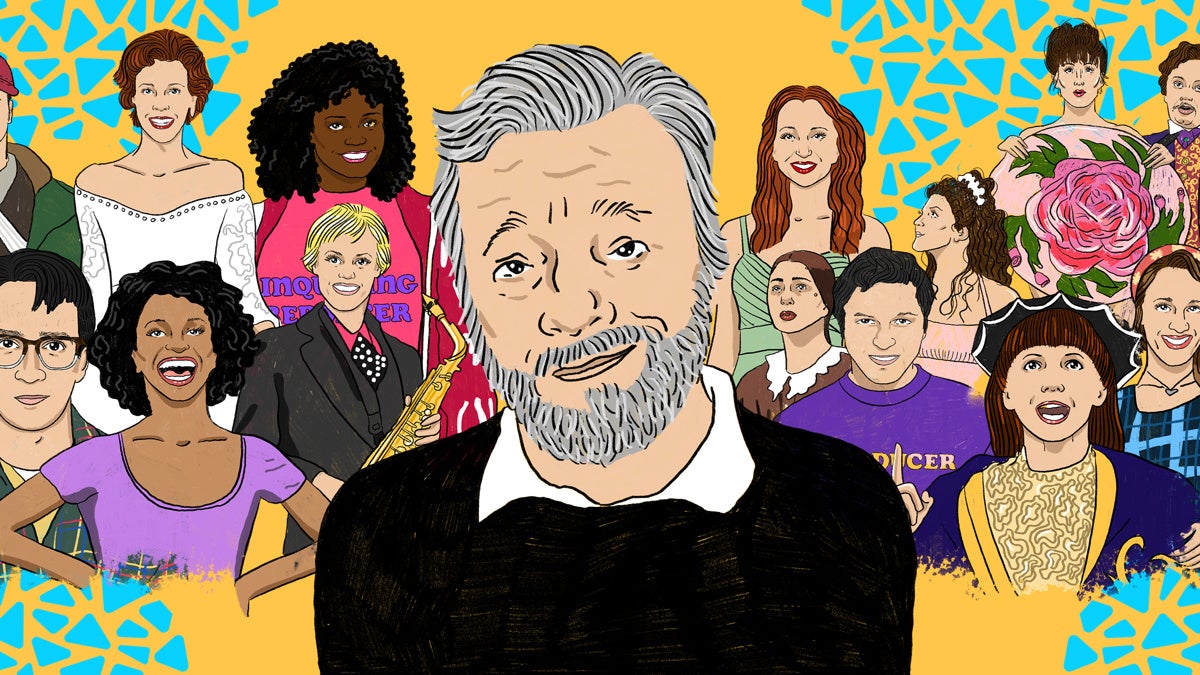 March 22 marks Stephen Sondheim’s 90th birthday. It’s impossible to state the great contribution and influences this titan of the stage has made to musical theater (though his nine Tony Awards and Presidential Medal of Freedom speak for themselves). We reached out to a number of people who have appeared in Sondheim shows to tell us what they love most about the legend. Read on for their answers and read their longer tributes here.

HE’S UNASSUMING
Three-time Tony-winning legend Chita Rivera dazzled in the original 1957 Broadway production of West Side Story, and she knew the musical theater icon “before he was the Stephen Sondheim. He was the handsome young man behind the piano—a quiet, sweet guy.” Sondheim’s reserved nature is a common theme from those that know him. Veanne Cox, who was nominated for a Tony Award for her performance in the 1995 Company revival, agreed. “If you didn’t know it was him walking down the street, you would never know it was him. He doesn’t have to put on airs because he’s Stephen Sondheim.”

AND PLAYFUL
Once you get past first impressions with Sondheim, many actors say that the composer is, in the words of Jason Alexander, “gracious, warm, trying to put people at ease in his presence.” And he’s playful too. For instance, Sondheim loves puzzles; he gives his cast puzzles as opening night gifts. So one time, Alexander—who was an original cast member of the 1986 Broadway musical Merrily We Roll Along—tried to out-puzzle the “master puzzler.” As Alexander tells it: “My wife and I decided to send him a holiday card in a code of our own devising. As neither of us knew jack about puzzles or coding, this was unquestionably one of the most nonsensical, patternless codes ever created by two inept humans. We were sure that if Steve responded at all, it would be to ask what the hell we had written. Instead we got a card with a beautiful ‘thank you’ written in the exact same code that he somehow cracked.”

HE IS HAPPY TO WORK WITH YOUNG PEOPLE
One would think an artist of Sondheim’s caliber would say no to a request to come speak to a group of students, but not Sondheim. Three-time Tony winner Lin-Manuel Miranda first met the composer when he came to Miranda’s high school, and what ensued was pivotal to the Hamiton creator: “He told anecdotes about the writing of West Side Story: the challenges of the opening number—he even sang us some discarded lyrics, the different versions of ‘America,’ glimpses of the writing process. It was my first exposure to the process of making a musical—not just the finished product. I can never repay him for that gift. It’s as responsible for me being here as anything else.”

HE WANTS PERFORMERS TO FIND JOY
Sondheim may write some serious musicals, but he doesn’t believe his actors need to be all serious while they’re performing them. Donna Murphy, who won a Tony Award for Passion, recalled an important question that Sondheim asked her during the run of that show. “Are you having any fun?” he asked her. “Because you must, you have to find the joy in this, because it’s not always like this. I know what this role means to you, and it’s not always like this.” Murphy recalled, “I gave him a hug and went up to my dressing room and cried for 25 minutes!”

IT’S ALL IN THE DETAILS
Like his smart and specific lyrics, Sondheim values precision. Debbie Allen, who played Anita in the 1980 Broadway revival of West Side Story, recalled seeing Sondheim in the rehearsal room with, “[director/choreographer] Jerome Robbins, [composer] Leonard Bernstein, [writer] Arthur Laurents and [assistant director] Gerald Freedman. They were all there, and there was an argument about where I took a breath in ‘America,’ which I found fascinating.”

THAT MEANS HE GIVES SPECIFIC NOTES
Elizabeth Stanley made her Broadway debut playing April in the 2006 Broadway revival of Company. She described an instructive note that Sondheim gave her: “He told me to make April ‘a little bit stoned.’ It was the most fun note to take and was so drastically subtle in shaping my entire energy with that character,” she said. Tony winner Jessie Mueller had her own story of an acting note that Sondheim gave to her when she was in the 2012 production of Into the Woods at the Delacorte Theatre in Central Park: “He told me I could ‘sing it more’ during ‘On the Steps of the Palace’ in Into the Woods. I probably said something like, ‘Sir, yes, sir!’” Such detailed comments is why Tony winner Laura Benanti said the best gift that Sondheim has given to his actors is the privilege of “working with him.”

PERFORMERS NEVER FORGET HIS COMMENTS
Tony winner Denis O’Hare was in the 2004 Broadway production of Assassins. He recalled a comment that Sondheim gave to him during the run. “Ah, Mr. O’Hare. You were your usual competent self,’” he recalled Sondheim saying. “I spent the rest of the evening wrestling with depression and elation.” Murphy had a similar story of a terse Sondheim compliment, when he told her, during her audition for Passion, that her performance was, “very nice.”

HE WILL CHALLENGE YOU
Joanna Gleason earned a Tony Award for playing the Baker’s Wife in the original Broadway production of Into the Woods in 1987. One of her favorite Sondheim anecdotes was when she didn’t think she could sing the song, “It Takes Two.” She remembered his response: “I went up to Steve and I said, ‘Boy, this is really in Chip’s [Zien] good key, it’s a little high for me. And he said, ‘I wrote this for your voice and if you have a problem with that, you should see a shrink’…I realized it was one of my favorite things to sing, and I got over it.” Alexander also had a similar story. During Merrily We Roll Along, Sondheim wrote him a song he didn’t think he could sing, and he told Alexander, “You have to learn.” That wasn’t a bad thing, according to the actor, “The man wrote the most character-perfect, musically stunning song for me and managed to include a personal challenge for me to hone my skills on. If that’s not genius, tell me what the hell is.”

HE HAS FUTURE PLANS
Tony winner Tonya Pinkins made her Broadway debut in the 1980 production of Merrily We Roll Along and she recalled that time the cast made a trip to Sondheim’s house. “He showed us a storage room with drawers filled with the scores of all the shows he had written,” she recalled. “Then he said, ‘These are the drawers for the shows I am going to write.’ That was so inspiring.”

HE LOVES WATCHING HIS SHOWS AS MUCH AS WE DO
Michael Cerveris has multiple Sondheim credits to his name, including his Tony-winning performance in Assassins. When asked what he loves most about Sondheim, the actor said this: “He can be (and often is) moved to tears by productions of his work being performed for him by performers he admires—whether they’re lifelong colleagues or a high school class. That he can be moved by things as an audience, as though he didn’t create them, is one of the things I love most about him.”