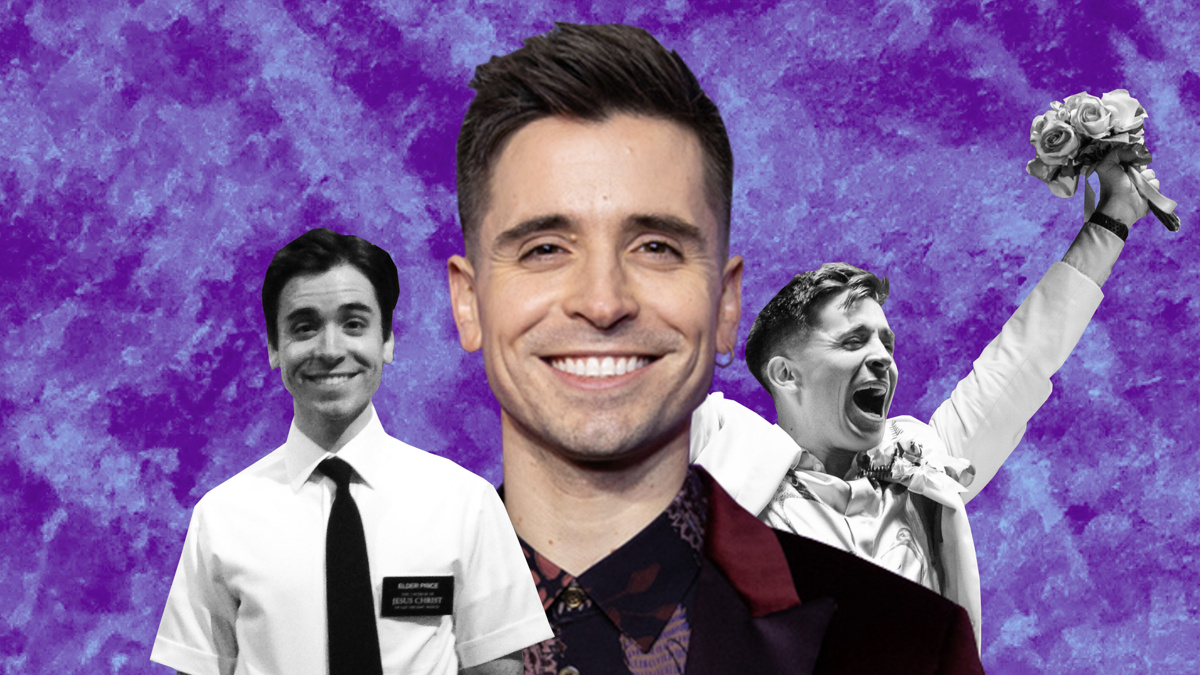 Matt Doyle is playing Jamie in the Tony-nominated revival of Company, and his take on the role in the Marianne Elliott-helmed production has garnered an Outer Critics Circle Award as well as Tony and Drama Desk nominations. Before wowing audiences in Company, Doyle built an incredible Broadway resume. On a recent episode of The Broadway Show, he joined Broadway.com Editor-in-Chief Paul Wontorek in the heart of New York City for a walk through his stage career, reminiscing in front of the theaters that were home to shows like The Book of Mormon, Spring Awakening and more.

On performing in Spring Awakening at the Eugene O’Neill Theatre: “This is the first stage door I walked through. I was 19 years old and got the call that I was being added into the company of Spring Awakening. I spent two years of my life in this theater doing that. It was a learning experience. I was thrust into this phenomenon, and I grew up so much during that process and learned so much about who I was as a performer. I was such a little kid when I was cast. I look at pictures now, and I’m like, ‘I was Bambi!’ They made sure that I really became a leading man while I was here. I had to cover one of the best, which is Jonathan Groff. He was such a great role model to have at that age.'”

On playing Hugo Peabody in Bye Bye Birdie at the Stephen Sondheim Theatre (formerly Henry Miller’s Theatre): “I got to work with John Stamos and Gina Gershon, and we had the time of our lives. We were so close backstage. I felt really taken care of there, and learned a lot of really great lessons from everyone. Coming off of Spring Awakening at the time, it was one that my family could actually come to. It’s still to this day my grandmother’s favorite show that I’ve done.”

On playing Billy Narracott in War Horse at the Vivian Beaumont Theatre: “This is my favorite theater in New York. So, it was such a thrill to be able to do War Horse here, which was a very, very different show for me. I did a play instead of a musical. It was the most incredible experience because I got to meet Marianne Elliott, and I got to work with the most remarkable puppets in the world. With all of the musicals I’ve done, I don’t think I’ve done a spectacular on that level in terms of the production. It was massive. To do it in this theater on a thrust stage in the Vivian Beaumont was so special.”

On playing Jamie in Company at the Bernard B. Jacobs Theatre: “Jamie feels like the culmination of everything in my career, and everything I am. I’m so proud to be able to tell this story, especially right now when we’re in this time where things really do feel like they’re starting to regress a bit. I just think about the kid that I was growing up and what he would’ve thought being able to see a couple like this in a classic Sondheim musical.”

Watch the video below, and head here to check your local listings for The Broadway Show. Hosted by Emmy-winning anchor Tamsen Fadal, it is the only nationally syndicated weekly theater news program.